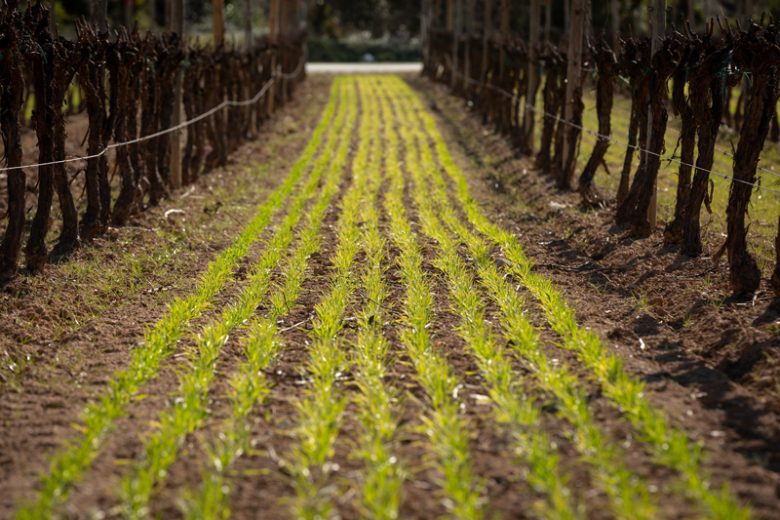 The project began this year with the sowing of four different plant species belonging to the grass and legume families, between the rows and around the vines in an area measuring half a hectare. CREAF is responsible for the sampling and analyses needed to determine the concentration of soil carbon before and after the annual sowing of the cover crops, while Jean Leon handles the agricultural tasks of sowing and vineyard management.

As Jordi Sardans, a researcher at CREAF and the study coordinator explains: “Using the vineyard soil as a tool for accumulating CO2 is a great opportunity to reduce the CO2 concentration of the atmosphere. Also, this solution isn’t just limited to vine-growing but can be used in any kind of cultivation, and it brings with it an increase in the soil quality.”

For Mireia Torres, the director of Jean Leon: “Beyond the organic vine-growing we do at Jean Leon, at all of the Familia Torres wineries we work to reduce the CO2 generated by our activity, and we also want to help to effectively reduce anthropogenic CO2 concentrations by sequestering the carbon and storing it in stable soil structures.”

The study builds synergies with the European project “Interreg Sudoe Coopereplace” that Jean Leon and Familia Torres are taking part in. Together with the University of Lleida, they are conducting cover crop and mulch trials, as well as trials where alternative products to copper are applied with the global aim of promoting sustainability and biodiversity.

Different studies show that crop soils can be a tool for accumulating atmospheric CO2 in the soil organically, thus contributing to slowing down the increase of this gas and, consequently, mitigating climate change. It is estimated that the carbon currently accumulated in the planet’s soil would amount to three times the carbon that is accumulated in all of the planet’s vegetation and twice what there is in the atmosphere.

Carbon farming has a very promising role in reducing the levels of atmospheric CO2. It includes a series of farming practices that have scientifically proven their efficacy, not only in terms of increasing carbon sequestration in soils and perennial crop structures but also in terms of enhancing biodiversity, soil structure, water retention capacity, etc.

Specifically, in the vineyard, the main carbon sequestration practices are the application of organic soil conditioners, the use of ground cover (natural or sown), and the incorporation of winter pruning and green pruning trimmings.

Jean Leon is a small Penedès winery that was founded in 1963 by Jean Leon (born Ceferino Carrión in Santander), a visionary who realized his two great dreams: opening the most VIP restaurant in Hollywood and making an exclusive wine to delight his select clientele. The winery, which has been owned by Familia Torres since 1994 and directed by Mireia Torres since 2010, was the first in Spain to make a single-varietal Cabernet Sauvignon wine and to obtain the “Vi di Finca” (single vineyard) recognition in Penedès for four of its wines, the maximum distinction awarded by the Autonomous Government of Catalonia. With 65 hectares to its name, all Jean Leon wines have been certified organic since the 2012 vintage and are exported to more than 40 countries.

CREAF is a more than 30-year-old research center that generates knowledge about the functioning of ecosystems, nutrient cycles, and biodiversity, among other topics, to propose innovative solutions that will help society to mitigate the effects of climate change, create adaptation plans, and increase the resilience capacity of natural systems. It has a public board of trustees comprising the regional Ministry of Territory and Sustainability, the Autonomous University of Barcelona, the Spanish National Research Council (CSIC), and the University of Barcelona. As a center, CREAF follows responsible research policies that take account of promoting free access to its research, equality of opportunities, and following an ethical code that will ensure the integrity of the science we produce.